Despite Hof being dead, if he wins the election, the office is considered vacated and must be filled by the board of county commissioners with a person of the same political party.

Aubrey — better known as “Sugar” — sat at a picnic table behind her house in Reno, sipping at a plastic bottle of root beer with one hand and taking a drag from a cigarette out of her other.

“I always wore the eight and half inch clear stilettos — not only because they match everything but because they’re the hardest to hit with,” she said. Her blue eyes rang with sadness as she recounted the past 16 years of life wending her way in and out of the legal brothels of Nevada. The smile had been wiped from her face.

“I felt like I didn’t have a choice,” Aubrey explained. “I was forced and then I stayed because I was scared to do anything else.”

Brothels are legal in all Nevadan counties with populations of 700,000 or less; this excludes Washoe and Clark counties — which include Reno and Vegas — who will vote on a brothel ban this November. Nevada is the only state in the country to allow any semblance of legal prostitution, a distinction they’ve had since 1971 when the state law sanctioned licensed brothels; right now there are 21 legal brothels scattered across seven counties in the state.

Lyon county commissioners voted last June to place a nonbinding question on the November ballot to outlaw brothels and they also agreed to abide by what the public decides this November.

The de-legalization of brothels is giving workers a long overdue platform to surface the larger more complicated issues behind their lives as sex workers, like the ongoing battle against physically and psychologically abusive brothel owners. The potential brothel ban is exceedingly divisive among Nevada residents. Supporters of the ban say that illegal sex trafficking rises in jurisdictions that legalize brothels, while opponents of the ban worry about its effects on the economy and the sex workers’ already precarious “legitimacy.”

The Nevada brothel industry profits are approximately $35-50 million annually, according to a 2012 report done by University of Nevada at Las Vegas.

I spoke with a handful of women who’ve worked in the Nevada brothels for years; many women enjoy making their own schedule, “being an intimate therapist,” and knowing that — when done right — legal brothels are safer than working on the street. “When done right” is at the crux of the problem.

These women believe that the ownership of these brothels — which is often exploitative at best and sexually abusive at worst — must fundamentally change, with safety and legal recourse for workers centered in any dialogue around the brothels.

Aubrey, a woman in her mid thirties, has been working in the industry since she was 13 years old. Her boyfriend at the time brought her home to his father, who began pimping her out around Reno illegally. When she turned 18, he began selling her to legal brothels, keeping the 50% profit she earned for herself. Her once boyfriend’s father — who’d been operating as her illegal pimp — then got her pregnant. Their daughter is now 11; Aubrey says he kidnapped her seven months ago.

She hadn’t been in contact with him for nearly ten years when he texted her out of the blue and asked where she was; she told him she was waiting outside a movie theater in Reno, not realizing he was also living nearby in the city.

She say she was standing outside the theater in downtown Reno when he pulled up, dragged his daughter into his car, and absconded with their child.

“I think they took Tiara to Mexico—that’s what I think,” Aubrey says.

Aubrey’s youngest daughter — who she had with her current boyfriend of ten years — has just started 3rd grade. “I told her no one should be able to touch you, but I realized I wasn’t even following my own guidelines,” Aubrey told me, a tear rolling down her cheek. “The more I think about it the more I realized I should always have control over my body and I didn’t know that.”

She says she has PTSD from her experiences as a sex worker and struggles to go into any public spaces without overwhelming anxiety taking over her body. She says she feels like she has a sign on her face that says “whore” and fears she might see a client anywhere she goes with her family.

“I was with one of my regular clients and he was bending me over as I was looking at a mirror and I said, I’m done, I can’t do it! I wanted to throw up. He asked if he could finish and I said, “no. Leave, goodbye.’”

Despite her history of abuse, Aubrey is against the brothel ban and believes that decriminalizing sex work would be a good first step in protecting sex workers against exploitation. But under the men who have historically managed the brothels, she says, they shouldn’t be legal due to the sanctioned and rampant abuse the women face.

The ownership of these brothels must fundamentally change, with safety and legal recourse for workers centered in any dialogue around sex work. Click To Tweet

Marvin — her old boss at The Old Bridge Ranch — treated Aubrey with respect; she says he cared for the women he employed. When Aubrey eventually moved to The Bunny Ranch however — owned by the infamous late Dennis Hof — she says she grew to feel suicidal, like she didn’t own her body. Hof was found dead on Tuesday morning just two days after celebrating his 72nd birthday.

Dennis Hof owned one-third of the state’s brothels and is the best-selling author of his autobiography “The Art of The Pimp”, as well as the star of HBO’s reality show “Cathouse,” Hof had also just won the Republican primary for the state Legislature in June. Bizarrely — despite his being dead — according to Nevada law, if the deceased candidate wins an election, the office is considered vacated and must be filled by the board of county commissioners with a person of the same political party.

Vastly more disturbing than these political machinations however are the lengthy and sickening sexual assault accusations by former brothel workers on at least four occasions since 2005, including an allegation made in early September of this year.

Jennifer O’Kane — a slender woman with blue eyes and dark hair — worked in Dennis’s brothels for a few months before quitting to start her own. She says she was raped by Hof while working for one of his brothels, and now is dealing with PTSD, depression, and anxiety from her experience. I struggled to hear her on the phone as she cried throughout the entirety of our interview.

“This is slavery at its finest,” Jennifer told me. “I have nothing against prostitutes, although I’m retired now. My opinion on the brothels? I opened a brothel myself to help these girls know that they didn’t have to have sex with the owner.”

Meanwhile, Olivia, a tall red head with a mysterious demeanor explains to me that due to the stigma surrounding sex work — despite its legality — she kept her occupation from her parents. She had worked in the Nevada brothels for four years, but recently quit to become a security guard at a club in Reno.

“I’m for it and against it you know? It’s our choice, but our safety is never their priority. Especially when you are working for the Hof houses.”

Diana Foxx—a bank security worker turned sex worker—is now retired and living in Florida. She explained that her life working at the Bunny Ranch for Dennis Hof also pushed her to the brink of suicide, due to his sexual assault of her. She now does what she can to prevent other women from joining the sex work industry through advocacy work with different anti-human trafficking groups throughout Florida.

“In my mind it didn’t feel like assault because he was my pimp, and he didn’t think so either,” she said. Diana explains that to an average person, legal brothels might seem like an “empowering career choice,” but that in reality, you’re simply helping perverted men push their agendas and make a lot of money. She says that for years she prayed every night for Hof’s demise. “Please let this pimp die Lord!,” she begged. “Let him die.”

Awaken — a local faith-based non-profit organization that provides awareness about trafficking, and helps provide housing and restoration for sex trafficking victims — is one of the main forces behind this bill being on the ballot. They’re also staunchly for the brothel ban.

Jason Guinasso has been a lawyer for Awaken for eight years now and has been helping the organization foster an “educational outreach program” this past summer throughout the Clark and Washoe counties. Guinasso says he’s been traveling around different neighborhoods explaining to locals that the banning of brothels perpetuates a dangerous cycle of violence. 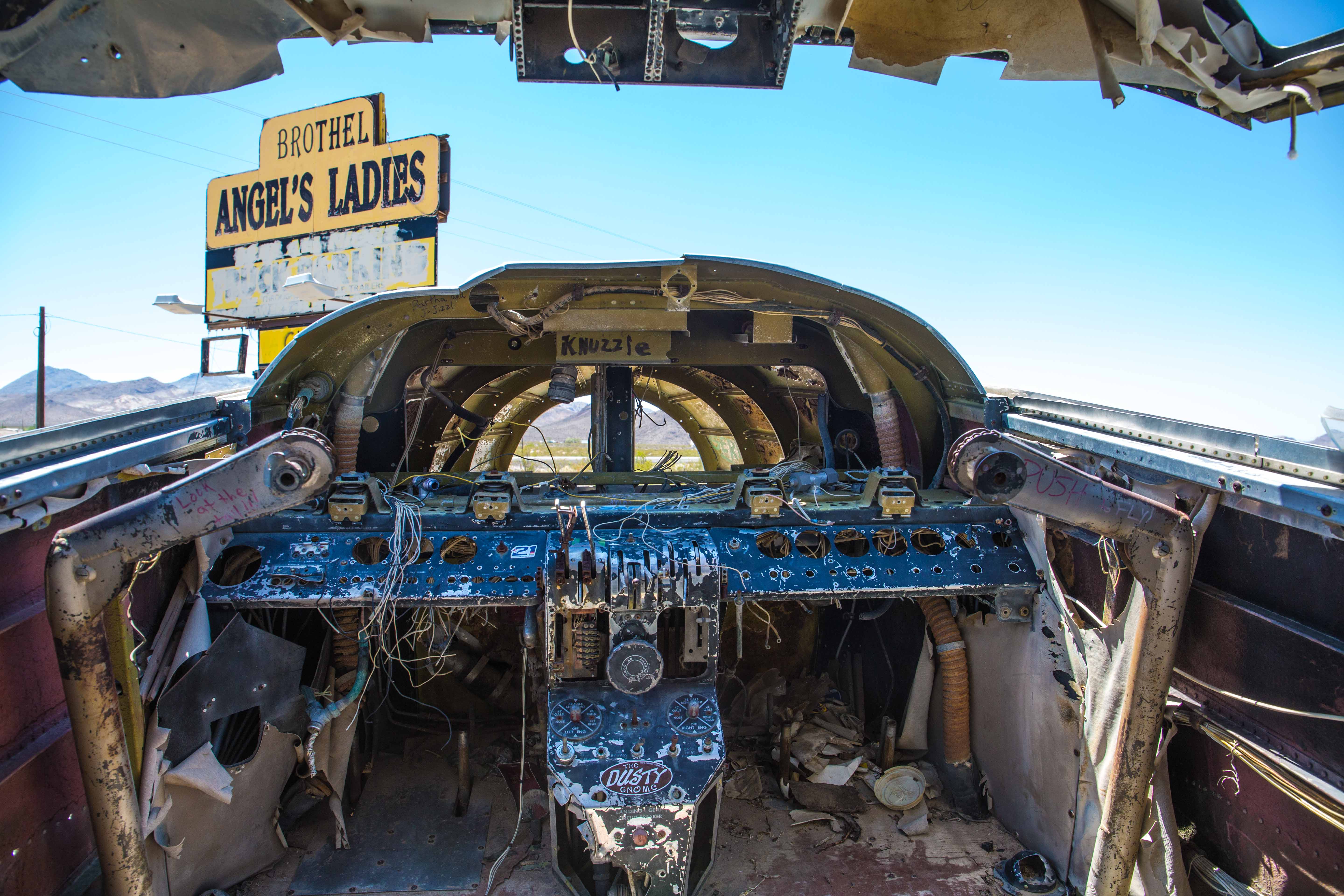 “Illegal trafficking is higher where legal prostitution is,” he told me. “We have commoditized females. We have said to the public that it’s OK to buy and sell women for men. We did a study on Backpage and Nevada had the highest postings in the country. Legalized brothels also impact and increase other crimes against women — domestic abuse, rape, domestic violence ending in death.”

Contrary to Guinasso’s narrative however, Pike Long, deputy director of St. James Infirmary — a peer-based health and safety clinic for sex workers in San Francisco — says that in the wake of of Bcakpage being shuttered this past April, there has been a spike in street-based sex work and screening clients has become more difficult.

“The very bill that was supposed to stop trafficking has quite literally given formerly irrelevant traffickers new life,” Long told the SF Chronicle.

All of the women I had the privilege of speaking with agreed that if managed correctly, legal brothels could be a good thing for the right person. They reminded me that the many laws and protocols that exist for safety in the workplace across the U.S. have not been instituted for sex workers to begin with and even the laws that do exist are ignored or overlooked.

For many Nevadan sex workers it’s not the ban on brothels that’s of the utmost importance. It’s the men running them and the huge power differential — in both the local communities and governments — between those in management and those that are employed as workers. And leveling that playing field requires much more than a ban.