In 1987, Doucet wrote the first comic of her eventual series Dirty Plotte, but no one would sell it. It was too dirty, too uncomfortable.

Feminist comics fans have had quite the year: Wonder Woman broke box office records last year and Captain Marvel is set to premiere the Marvel Universe’s first female lead this spring. Even in bookstores, this year has seen hits like Comics for Choice and Bitch Planet that tackle overtly feminist themes. It’s a far cry from the landscape that feminist comic artists navigated in the ’70s and ’80s, when comics was an insular boy’s club of artists, writers, and publishers, and no one — not even feminists — would publish radical female cartoonists.

In 1972, realizing that no traditional, male-run comic book company would publish them, female comic book artists in San Francisco joined together to publish Wimmen’s Comix. The collective published 17 issues, the last in 1991.

One of the artists that Wimmen’s Comix published was the young Julie Doucet. At the age of 23, Doucet contributed “You know, I’m a very shy girl,” “The First Time I Shaved My Legs,” and “Tampax Again” to Wimmen’s Comix Issue 15.

But Doucet had bigger plans than publishing a few comics; she wanted to write her own strip.

In 1987, Doucet wrote the first comic of her eventual series Dirty Plotte (French Canadian slang for vagina) but due to its unrelentingly raw content — nudity, explicit sex, female carnality, violence, and of course, menstrual blood flooding streets like a rogue river — no one would publish it. She even asked a feminist bookstore to carry a self-published version. But no one would sell it. It was too uncomfortable. 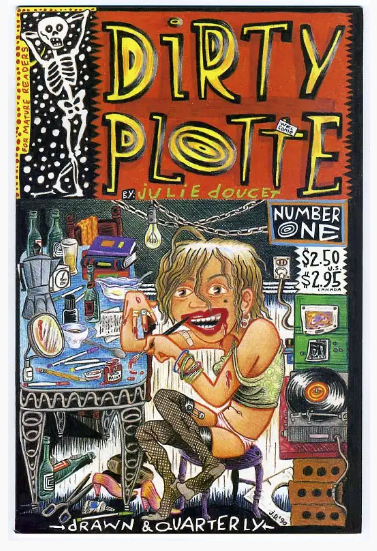 That is until the Canadian comics publishing company Drawn & Quarterly — which describes Dirty Plotte as “quite simply one of the most iconic comic book series to have ever been created” — began printing her work in 1991.

In the pages of her comic, Doucet’s self-inspired character “Julie Doucet” draws comics, masturbates with a cookie, dresses as a man, castrates one, cuts off her breasts, and sews a penis onto herself.

Julie skips cleaning her house, but pays special attention to her vaginal hygiene in the bath. She stresses about purchasing the perfect bra in a dream, even though the actual Julie never wore one. 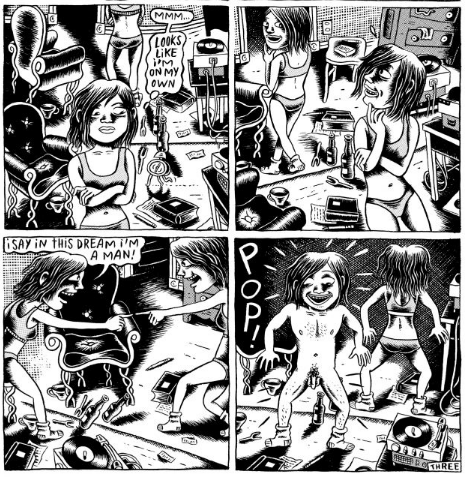 For drawing such loud, provocative and seemingly vulnerable scenes, Doucet herself is rather quiet and measured.

This past November, she spoke on a panel at Comic Arts Brooklyn, an annual comics festival at the Pratt Institute in Brooklyn.

Several times during the panel, Moore tried to complement Doucet’s work and place her in a canon of influential comic creators — a woman from the audience even stood up to tell Doucet that the comic about Doucet’s first sexual encounter had a profound impact on her own coming of age — but Doucet shyly shrugged off the attention. Moore told Doucet that her art had fundamentally changed the world of comics; Doucet quietly laughed, “I wasn’t aware.” 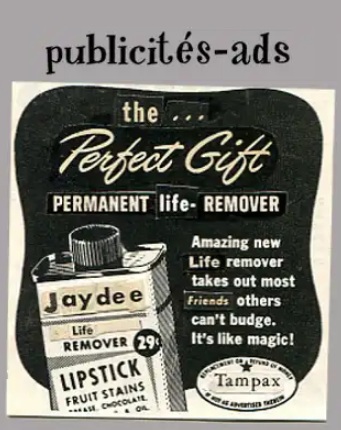 It’s difficult to know whether Doucet is genuinely modest, or is keen not to take up too much space as a female artist exhausted by the dominance of men in the comic world. But it seems more likely to me that she was being honest: in the middle of the ‘90s, trying to draw comics about gender and sexuality as a woman, Doucet was just trying to get by. She didn’t and couldn’t know her comics would have such a profound effect on comics culture, and it seems, she might still not believe it.

Following the panel, the energy was palpable. I approached artists selling copies of Comics for Choice, prints of feminist figures, or zines about their or their female family members’ own experiences, and asked them who they looked to for inspiration. Many named Doucet.

When I interviewed Doucet over email however, she wasn’t sure if people like her comics more than in the ‘90s, but she was sure that the resurgence of feminism had an influence: “People seem interested in the gender theme comics in a whole different way, that’s for sure.”

Despite her celebrated success and rippling influence, Doucet stopped producing comics in the mid-2000s. She credits the comics “boys club” and the unreliable income with pushing her away from the medium. 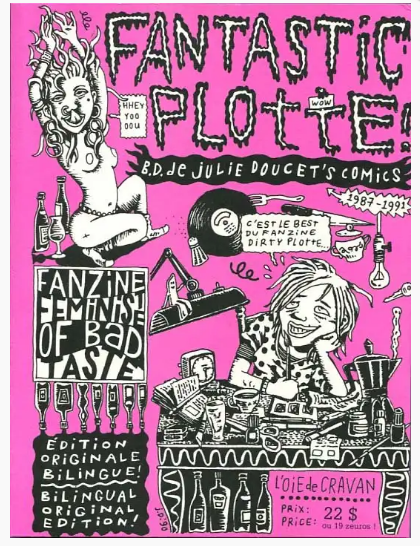 And although Doucet recognizes the landscape has shifted for feminist creators, she doesn’t see herself reentering the comics world anytime soon:  “It feels like I don’t have any stories to tell,” she wrote me. It’s a strange phrase to hear coming from Doucet. After all, if her work was about almost everything—it was predicated on exploration. Her comics explored gender identity, sexuality, womanhood, power, and violence—what stories didn’t she have to tell? 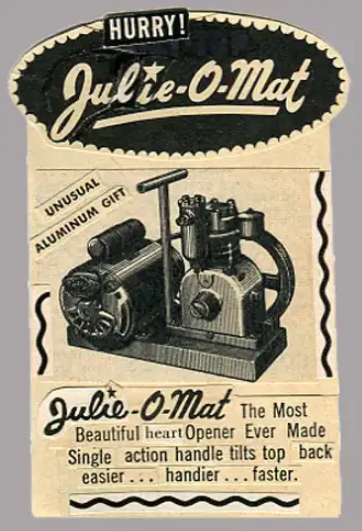 Doucet hasn’t quit creating however. Instead, she turned away from text and towards images. She returned to printing—linocuts, woodcuts, and silkscreen printing—which she has originally studied at university. She published a book of collage and poetry called Elle Humor in 2006 and another titled A l’Ecole De L’Amour in 2007.  She even designed a cover for the Penguin Classics Little Women that looks like it could be a page from one of her comics.

Doucet has shirked off the weight of the comic world, but her work continues to draw attention and glean recognition.  In 2006, she had a solo exhibition of her print work at the Galerie B-312 in Montreal; in 2007, she participated in the Biennale de Montreál; and in 2008, she appeared at the Triennale québécoise at the Musée d’art contemporain de Montréal. Most recently, in 2017, her comic work was featured in a retrospective exhibit at the Fumetto Comic Festival in Luzern, Switzerland.

“It was the first time I got to see the extent of all my comic and non-comic production,” said Doucet. “It was huge, I couldn’t believe my eyes. I hadn’t realized how much work I’d done in my life. That was very overwhelming.”

Doucet remains a force in the comic’s world, especially now that Dirty Plotte has been republished. And she’s proving that female artists can be more than one thing. Just as her comics depicted Julie-the-lover, Julie-the-man, Julie-the-artist, Julie-the-woman; so her life is revealing Julie-the-cartoonist, Julie-the-print-maker, Julie-the-poet.

She wrote me that she’s started drawing again this year and has been working on a series of geometric cardboard structures, although she admits, “I’m not sure where I’m going with that.”

Doucet’s work continues to explore the infinite permutations of womanhood and artistry, but her role as Julie-the-publisher is perhaps the most radical to date. She started her own publishing house in 2013, Le pantalitaire, to publish her own work and has found herself full circle: from unpublished to publisher—from powerless to powerful.